My Desk and Other Paths to an Understanding of Disconcerting Noises

This is the desk where I now work. When we lived in a small town and had an entire hundred year old Victorian house to ourselves, we had an office with a desktop computer and a printer. Nevertheless, I ended up working on a laptop in the dining room with foot high piles of books to my right. I’d write late into the night, leaving the television on in the living room while listening to music. This was to ward off ghosts or any other sorts of creatures I didn’t wish to encounter anywhere but on the page. Now, the desk where I write is off to the side of our bedroom. I don’t have a television on or play music because I might wake up my wife or my young son who sleeps in the room with us. We’re back in the big city. Whereas in our small town the stray noises I might have heard were that of a freight train passing by to the east or our neighbors screaming at each other, in the big city I’ll usually just hear sirens and brief random shouts of anger or ecstasy coming from the street. Somehow it’s less distracting when it’s a voice you don’t recognize. Back in our small town, when I’d hear someone yelling and have a face to go along with the voice—a person with whom I’d chat for a while or else another person to whom I’d quickly nod and then go on with my life—I’d think about it for a while. I’d consider how with some folks making less eye contact with them was the way to be better neighbors for them. Others, though, were likely to invite you in for tea and biscuits and a telling of their life stories. There was always some story that interested me in one way or another in the neighborhood there. Something that was totally new to me, whether it was something I loved or something I hated. I don’t get distracted as much by the outside world here in the city. Maybe that’s because this is where I come from. And maybe that means it’s time for me to start inviting the neighbors in for tea and biscuits, and telling them about all this shit that's been going on in my head. 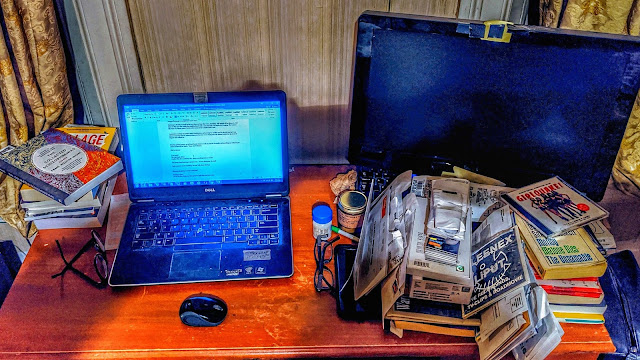