January 02, 2020
ELMER OMAR BASCOS PIZO shares, "My writing desk inside my bedroom is actually a computer desk. Its left rear leg is wobbly and beyond repair. I just propped it with a piece of 2x4. I bought a replacement 2 years ago. I didn't assemble it yet. So I'm stuck with this old, wobbling desk. (Like my left knee anyway. I'm walking with a torn ACL and Multiple Meniscus tears. This happened in Jan 18, of 2018). I don't have books on shelves to show since I donated most of them to the Municipal Library in my old town in Eastern Pangasinan. What I'm keeping are in 4 medium boxes now." 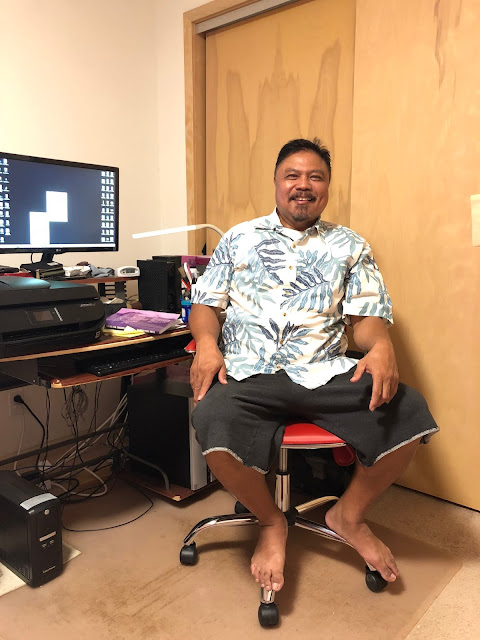 Elmer comes from a family of farmers, teachers, and religious leaders in the Philippines. After graduating from high school, he entered St. Andrew’s Theological Seminary. In his second year at the seminary, he transferred to Benguet State University, graduating with an Agriculture degree in 1981. For a time, he farmed in his home town before going on to teach Poultry Production at a National High School in a neighboring town. He then went to Saudi Arabia to work as a Greenhouse Agriculturist. To record the cruel working conditions he and his co- workers encountered, he began writing a journal about these experiences.

On the day he returned to the Philippines, the bus he was riding back to his province was involved in a head-on collision with another bus. Six of his fellow passengers died, including an elderly woman seated next to him. Pizo suffered a concussion and, because of his injury, lost his short-term memory. His neurologist suggested that he write as part of his therapy. He referred to his journal begun in Saudi Arabia and began writing poems. Pizo was a Poetry Fellow at the 2000 Silliman National Writers Workshop in the Philippines and Poetry Fellow at the Vermont Studio Center in February 2006. His poems have been published in several print and online publications in the United States and in the Philippines.

A resident of ‘Ewa Beach for the last twenty-two years, he now works as a handyman. Prior to this, he worked as an outreach worker for the Hawai‘i Department of Health’s Tuberculosis Program and an inspector for its Vector Control Program for almost sixteen years.